Volti’s professional vocalists, under the direction of founder and Artistic Director Robert Geary, are dedicated to the discovery, creation, and performance of new vocal music. The ensemble’s mission is to foster and showcase contemporary American music and composers, and to introduce contemporary vocal music from around the world to local audiences. 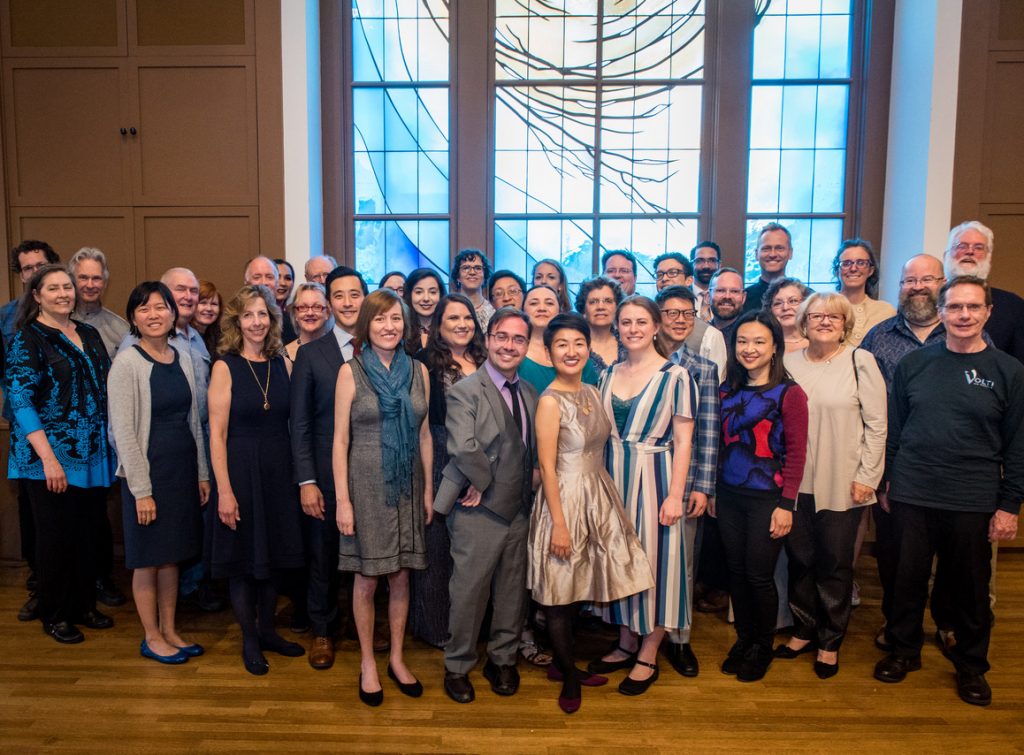 Many singers and composers, past and present, at Volti’s 40th Anniversary Gala, May 2019

In the fall of 1979, Robert Geary established The San Francisco Chamber Singers, opening that first season with an all-Bach program. Quickly favoring the music of Benjamin Britten, the choir soon began to sharpen its focus on today’s music, and by the 1990s was focusing almost exclusively on premieres and commissions by living composers from the U.S. and abroad. (To learn more about our commissions, premieres, and other repertoire from recent seasons, click here.)

2003-04 marked the choir’s 25th Anniversary, and the ensemble celebrated with concerts featuring eight commissioned world premieres, as part of a season dedicated to American music. And, after 25 years, the choir adopted a new name – Volti – meant to evoke the energy, vigor, and forward-looking spirit the group is known for (taken from the Italian, volti means “turn”; used in music, it’s normally used in the construction volti subito, which directs musicians to “turn the page quickly” or “look ahead”).

Volti is esteemed for its commitment to and excellence in performing works by contemporary composers, particularly American composers. With 40 seasons of performances to its credit, the group has become one of America’s renowned professional choirs. The ensemble has performed at music festivals in the U.S. and abroad to remarkable critical acclaim, always performing new works by American composers as representative of the artistic excellence and spirit of its home.

“Among the wealth of choirs and vocal ensembles in the San Francisco Bay Area, few can claim their commitment to and excellence in performing contemporary music with as much conviction as Robert Geary’s Volti. Their steadfast dedication to new works has made them one of the most exciting and forward-thinking performance groups, and a cornerstone of the rich community of new music, in our region.”
–Charles Amirkhanian, Other Minds

Robert Geary accepts awards at the 2009 Chorus America national conference.  Bob’s in the center, with Alice Parker on his right and David Lang on his left.

Volti has collaborated with many distinguished theatrical and musical organizations, both on stage and in recording. In just the past few seasons, we have:

Planned for the 2020/2021 season but postponed due to COVID-19, we look forward to the time when we can premiere “Angel Island Oratorio” with the Del Sol String Quartet. Under a grant from the William and Flora Hewlett Foundation’s Hewlett 50 Arts Commissions program, Chinese-born American composer Huang Ruo will create a bilingual oratorio for string quartet and chamber chorus, inspired by poetry inscribed on the walls of the Angel Island barracks between 1910 and 1940.

In addition to touring in the United States and Germany, the group was for many years the Choir in Residence of the Newport Music Festival in Rhode Island. Volti’s performances have been broadcast in the Bay Area on KALW, KQED, KKHI, KDFC, and KUSF; nationally on Monitor Radio, Voice of America, and National Public Radio; and internationally on American Armed Forces Radio and Swiss International Radio.

In 2003-04, Volti inaugurated the Choral Arts Laboratory. Over the program’s 15-year history, 16 young American composers enjoyed the opportunity to work with Volti’s professional vocalists as they prepare a new work for performance. The program is currently on hiatus.

In addition to the commissions and premieres of the concert season, Volti continues its commitment to education by producing the annual Choral Institute for High School Singers. This innovative program, developed by Robert Geary, provides concentrated training and performance opportunities for multiple choirs numbering up to 200 students over the course of an intensive weekend schedule. Volti’s professional singers serve as the resident choir and faculty and, along with Bob, lead rehearsals and teach voice lessons, classes, and seminars. These sessions are designed to give a focused and concentrated training experience to high school singers in an atmosphere that encourages, inspires and supports emotional and intellectual growth in a highly structured and creative musical environment. We hope to be able to resume this program in Fall 2022, pandemic conditions permitting.