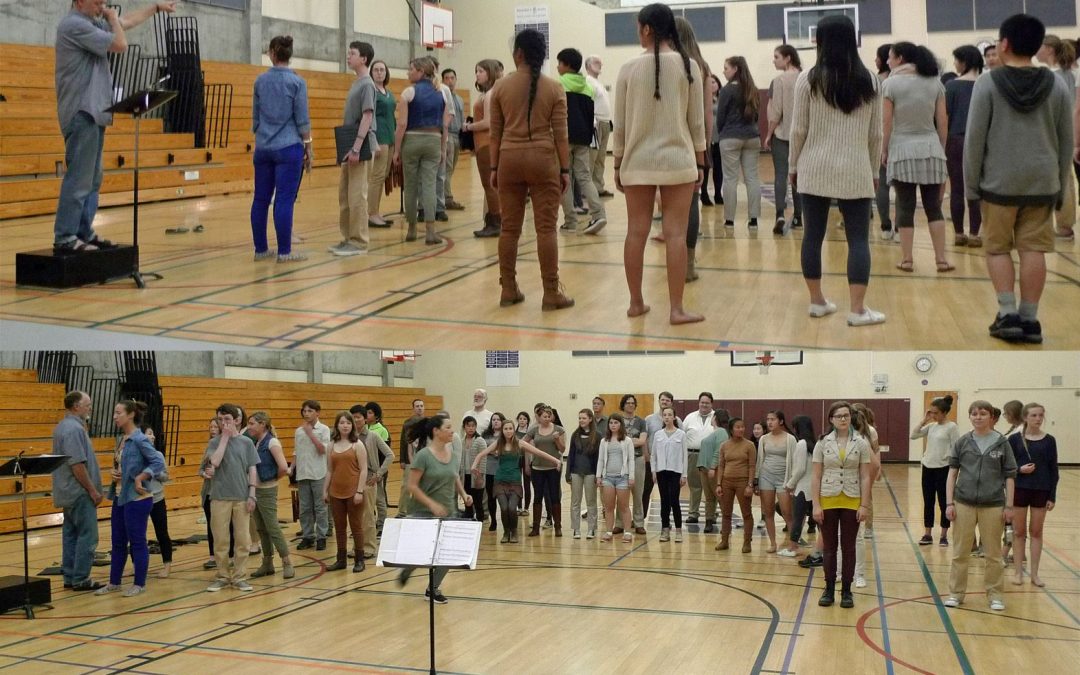 The creative team for Pandora’s Gift is in overdrive these last few weeks before the premiere. The intensity and immersion of rehearsals leading up to production week is both challenging and exhilarating. As Executive Director Barbara Heroux likes to say, Pandora is really ‘a different kind of animal,’ and the creators and performers alike are enjoying wrapping minds, voices, eyes, bodies, and hearts around this new art form.
Composer Mark Winges said this about the current state of things:
I suppose opera composers are used to the collaborative nature of the enterprise. Choral composers, not so much. Bob’s initial desire to create a significant choral work that includes movement by the singers + staging / lighting —> my suggestion to create a work based on the Pandora myth (because it has the “movement” in the subject itself: movement from “a world with no evils but also no hope” to “a world with evils and terrible things” to “a world with hope”) -> the back and forth with Denise to create the libretto -> meetings with Erika to get ideas of how movement can “work” with the singers; all of this before I wrote a single note. Pandora’s Gift is a very unusual piece for me. As the performers are creating the “whole”, it’s absorbing to see the work take shape.
Even though it has the occasional vocal solo, and Erika’s choreography sometimes highlights a single singer or small group of singers, it’s mostly the entire group. There is no one person representing “Pandora”. It has more elements of ritual than story, and the genre of unaccompanied choir highlights this. It tells an audience less by not having specific characters, but invites them into the myth more, giving them the freedom to project their own heart and mind onto the experience as it unfolds. 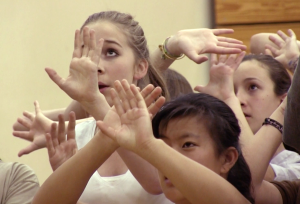 Composers find themselves in an interesting and unusual place at this point in the creative process. The music is written, is ‘final’ in some ways. It’s on the page and in the performers’ arena, so the progenitor of the work now becomes an expert observer; really an audience member.
Erika Chong Shuch, stage director for Pandora’s Gift, wrote recently about what she was witnessing in rehearsals:
I am appreciating that the process of building a physical landscape for the music is allowing me to “see” Mark’s ideas exist in 3 dimensions. My goal has been to invite viewers into the world of the music by providing a kind of kinesthetic roadmap. The singers couldn’t be more dedicated and committed to this task. They are living in the choreography and the music with fullness; bringing the fullness of their humanity into their gestures, voices, eyes, and hearts. 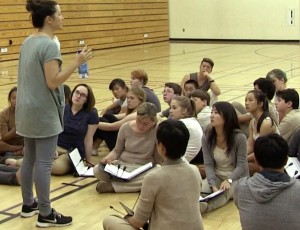 The performer’s generosity of spirit and willingness to TRY is astounding. When I watch the work unfold, I see PEOPLE. Human animals that are telling a story about what it is to be human. About what it is to wrestle with what we are capable of, both in terms of violence and kindness. I see humans being human. Which is actually kind of hard to do. It’s hard to let go of the need to be impressive, and allow the act of performance to be an invitation into one’s own tenderness. Into one’s own confusion. We want to be seen as strong and in charge and fierce.
I think we are telling a story about the kind of beauty that happens when we close our eyes, forget that the world is watching, and face an aspect of self that we don’t quite understand. And maybe this is where true “hope” lives. In the mystery. In the silences between. Behind closed eyes.
I have been thinking about how in the myth of Pandora, we wouldn’t even NEED hope had Pandora not let out all that other evil stuff first. Hope comes as a response to the box’s initial outburst. I’ve been thinking about how humans would not be human without all the “bad stuff” that was let out of the box. So is the story of Pandora’s box a myth about the birth of consciousness? It’s another creation myth, right?
As we all approach the premiere and prepare to be immersed in this ‘new kind of animal’ that Pandora’s Gift will be, we can take a moment behind closed eyes to envision our own ideas about creation and hope. The story continues . . .
Spread the love
TUNE IN
ZONE OUT
TURN UP