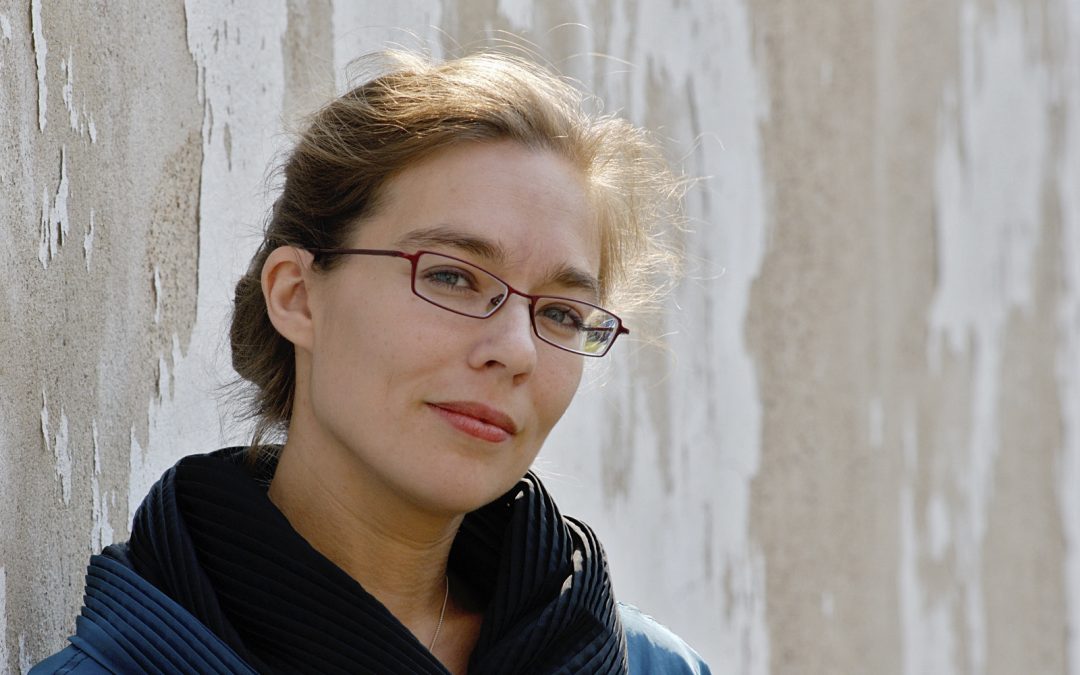 In May 2018, Volti will premiere “Chant des Voyelles” by Žibuoklé Martinaityté. We sang her gorgeous “The Blue of Distance” last season and recorded it; it will be on our next CD, to be released in 2019. We’re excited to talk to her about what’s in store for us in the new piece.

Volti: Hello, Zibuokle. Can you tell us something about the piece you’re writing for Volti? Are you setting a text, or is this more of a wordless soundscape, or … ? Do you have a title yet?

The title of the piece is “Chant des Voyelles” which means a Song of the Vowels or in this case it is rather an Incantation of Vowels. There are no words to be heard but plenty of vowels!

The creative process of this piece has taken many turns. As I was trying to choose a text, at first I wanted to settle on a specific language. Continuously living in two languages – my native Lithuanian and English, I had an unresolved ambiguity about the choice of language for the piece. Reading through various texts I came across the writer Jhumpa Lahiri who being a remarkable English speaker decided to write a book in a new language – Italian. In her book “In Other Words” there is a quote that encompassed this inner state that I could relate to “When you live in a country where your own language is considered foreign, you can feel a continuous sense of estrangement. You speak a secret, unknown language, lacking any correspondence to the environment. An absence that creates a distance within you.”

Coming from this perspective I was considering to include both languages in the piece. Then I realized that whatever language I was going to use – it would be a translation of some sort, either for me or for the listeners and singers. I was aiming for something more direct, a communication that goes beyond words and supersedes them, a communication that can be understood by everyone. That’s how I came to vowels thinking how they are almost the very first sounds we make when we attempt to speak as babies.

Volti: How do you find inspiration for a new piece?

In the autumn of 2017, I was at a creative residency at the Pocantico Center, which is located at the Rockefeller estate Kykuit near New York City. There among a rich collection of outdoor sculptures, I encountered a work by the cubist sculptor Jacques Lipchitz called “Chant des Voyelles”. It was titled after an Egyptian prayer composed only of vowels that was designed to subdue the forces of nature. Further research showed that many ancient traditions (Egyptians, Greeks and Tibetans) ascribed sacred, mystical and healing powers and significance to vowels. The details might vary in different traditions, yet it is clear that something miraculous happens through the very act of prolonged repetition of certain vowels – whether in the form of a mantra or prayer or as a self-healing ritual. Also each vowel in elongation stimulates an appearance of particular overtones of the natural harmonic series. I wanted to experiment with subtly shifting, sometimes barely audible clouds of overtones resulting from the sustaining of certain vowels in multiple voices.

All these thoughts were present when composing the piece. I worked with vowels dedicating an entire section to one single vowel and then also mixing them up in various densities. I have yet to find out together with the singers and listeners what effects these vowels might have.

Volti: Are there particular challenges, or particular pleasures, in writing for a group of voices rather than a group of instruments?

Through many years of listening I discovered that even the most dissonant chord can sound quite plausible when being sung by human voices whereas the same chord might be a bit discordant when played by some instruments. So the pleasure of writing for voices comes from knowing that everything you compose will have an added dimension of human and even spiritual warmth. Voices are truly magical instruments yet they pose some challenges as well. One of them is to remember that singers need to breathe from time to time:)) The phrasing of a musical thought has to account for that.

— and a follow-up, is there anything particular about writing for Volti, working with Bob and this particular group of singers?

When I heard Volti perform my choral piece “The Blue Of Distance” I was moved to tears – there was an unparalleled perfection of pitch, which is extremely important for me because of the utmost focus on the harmony. To hear the piece exactly as you wrote it – this doesn’t happen very often in a composer’s life. In addition to the wonderful collection of voices, I think it has a lot to do with the conductor. Bob dissects the score to minute details and immerses himself completely into that world. No technical challenge in the score can throw him off. He handles everything with patience and spends as much time as needed to achieve what’s written in the score. When I watched him work with the group, I had a feeling that he himself was the composer of the piece! In other words, his accuracy of both the score and its emotional content is something truly convincing. As I was writing this new piece for Volti, I knew that I will be understood and my intentions will be carried out through Bob’s articulate guidance.

Volti: What music of any genre do you listen to or enjoying hearing in concert?

I love going to concerts and listening to live music, mostly classical. The genre matters less than the quality of the music itself as well as the performance. There are performers who make you anticipate each upcoming sound, who pull you in completely from the very first note. That can happen in any genre.