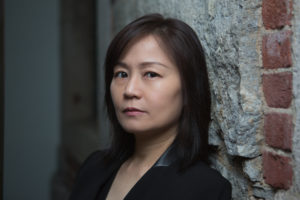 For her Volti commission in 2009, Yu-Hui Chang set two poems by the wonderful poet Billy Collins. Click on the link below to listen to the second of the set. The full piece – “Being: Two Collins Songs” – is on the Volti CD “House of Voices.” The CD title is taken from this poem.

Every day the body works in the fields of the world
Mending a stone wall
Or swinging a sickle through the tall grass-
The grass of civics, the grass of money-
And every night the body curls around itself
And listens for the soft bells of sleep.

But the heart is restless and rises
From the body in the middle of the night,
Leaves the trapezoidal bedroom
With its thick, pictureless walls
To sit by herself at the kitchen table
And heat some milk in a pan.

And the mind gets up too, puts on a robe
And goes downstairs, lights a cigarette,
And opens a book on engineering.
Even the conscience awakens
And roams from room to room in the dark,
Darting away from every mirror like a strange fish.

And the soul is up on the roof
In her nightdress, straddling the ridge,
Singing a song about the wildness of the sea
Until the first rip of pink appears in the sky.
Then, they all will return to the sleeping body
The way a flock of birds settles back into a tree,

Resuming their daily colloquy,
Talking to each other or themselves
Even through the heat of the long afternoons.
Which is why the body-the house of voices-
Sometimes puts down its metal tongs, its needle, or its pen
To stare into the distance,

To listen to all its names being called
Before bending again to its labor.