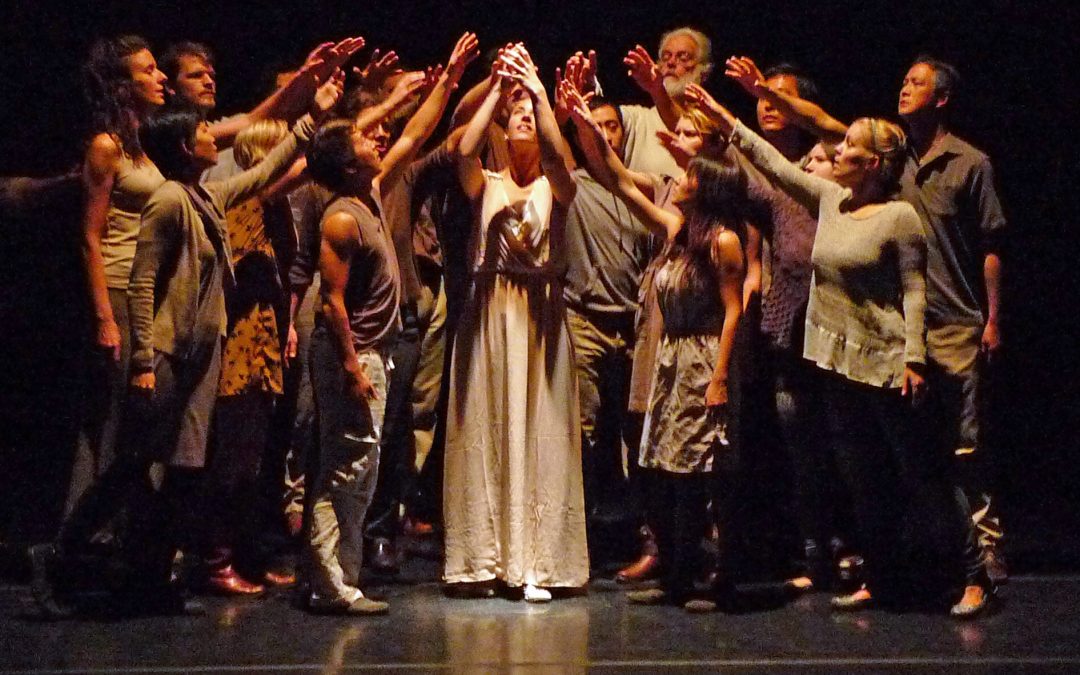 The initial impetus for Pandora’s Gift was Bob Geary asking Mark Winges to write a piece for Volti that would include movement on the part of the singers. Mark felt it important that the movement / staging not feel “tacked on”, but rather be generated or suggested by the story or subject matter of the piece, and he suggested the Greek myth of Pandora. The story itself has movement: a world without evil in it (but also without hope) → the unleashing of evil into the world → hope as the last and smallest thing in the box, but the most important thing in the box. In experiencing the story, one has “started in one place and moved to another.”  The myth touches on curiosity, evil, fear, and finally, hope.

Mark expanded the concept to include a children’s choir (the virtuosic Ensemble from the Piedmont East Bay Children’s Choir) as a means of broadening the sonic palette. Denise Newman wrote the libretto for the three-movement piece.

In the first movement, Dawn, the libretto mixes curiosity / the calm before the storm / apprehension. The music reflects these elements. It starts with phonemes (individual sounds with no meaning), representing that “missing something” (both evils and hope). Dawn is a combination of fast and slow, words that are clear, text that is obscured, sung sounds, spoken and other non-sung sounds, culminating in a whispered “furious” as Dawn dissolves into uncoordinated chittering and hissing. This Dawn does not remain silky for long.

In the second movement, All Hell breaks loose when Pandora opens the box and all the calamities are unleashed on the world.  Much of this section is from words and images written by the children from the Piedmont Choir, created during a poetry workshop with librettist Denise Newman. The use of phonemes after the “Ticking time” stanza intensifies the rhythm at that point in the piece, but also has its own symbolism: some calamities are so horrible that words completely fail us.

Finally, in the third movement, the last remaining thing in the box is discovered – Hope. Even though the third movement isn’t particularly long, its music has the slowest unfolding and is the most settled in the entire piece. The movement toward Hope becomes inexorable, inevitable, growing into the most important tree in our human forest.

Pandora’s Gift was made possible by a grant from the Gerbode-Hewlett Foundations Music Commissioning Awards Initiative.

Silky silky dawn
dew on the sky grass
life before strife
all is silky, all is singing,
except that pensive box.

What to do with a gift from an angry god?

Don’t open it!
But the box has spoken.
Then keep it locked.
The lock is broken.
Bury its bones—in pace, in pace.
Hear its moans—no pace, no pace.

Who could resist such a mysterious gift?

In the silky silky sky
a yellow eye watching
bait and prey
led astray
all is silky, all is waiting.

Why not do what wants to be done?

In there
Out here
Are we, anywhere?
Many a thing
comes bidding—

Giant moth-messenger
flying up
from Hell

Doom on its heels mowing down
Death singing—endless bloody war!
Warlords at every border, going for broke
in the air, on the ground, shoot to kill
panic, iron fists beating down, down,
down the fiery tongue slides
thunder splitting, earth shaking and spewing
tiny cries…
Is…true…nightmare…end, fated? In the dream of the dream, the crooked horizon, dare we ask… more…in…there?

Ticking time, work, slip behind, to death, clock of judges.
A hundred puffed up kingpins going off on others.
I don’t understand the schema, SKEE-MA—never
never can we understand each other. Spinning
beast faces. No time to mourn, no end, no rest, pure tiredness,
a thousand petty tyrants gain the whip hand,
pile it on automatons, mountains of trash,
tear-proof plastic, picking through a zillion plastic bags.
You’re zip, zilch, you’re a fly-sized zero.
Fragile wings… smudged out…ash-covered lips…ask… is it over…hell has…an end?

Ticks and fleas and mosquitoes feast on hides,
can’t hide. The body, a pest-host prison, no exit,
shut off, shout out, cut off, cut cut, can’t cut it out.
Delirium cries, heave and surge, scratch it, c-sharp.
Doors open and creak goodbye, leave, left, to die.
it oozes…everywhere…cellar to moon… has dawn …gone? Be their …shell…make a tent… shelter the weak…everyone…everything…all?

All is lost All is lost wails the chorus of ghosts
factory stacks and charred tree stumps like silver
needles shoot up, to check out, caution,
danger mind. Teams of pessimists making static
this one endless night stretching back to the Dark Ages.
Everywhere… Hell has…conquered? Its grid… In the dreadful dream, can’t wake can’t sleep on…is that all?

All is lost All is lost
Auto piloted throngs of haters and mockers smear sludge
in their wakes, know not what they do,
go little dynamos go, keep the cruel works going, no questions asked.
Remember grass…ground…lit up… dew drops… now where?
Nowhere.

To lose
love
the skill is
gone
to live

To lose
love
the skill is
gone
to live

Done, gone,
over done
pressing down.

Get up.
Dress the stump.
Move stones.
Stoop, sweep
ashes up.

It goes on
dragging as it goes
its charred stump.
Nothing good
will ever
come again.

Blue streak above,
sleeping seeds below—
they just may, why wouldn’t they?

In the gut
after the last sob, sobs.
Possibly, feasibly, for all one knows.May your wishes come
May your days go
May this find you
May all beings be

Open open hope a golden opening
flow with the living in time in song.